After leaving the turquoise waters of Marble Canyon behind we moved on to the Paint Pots. From Marble Canyon we followed the trail along Kootenay River. The big wild fire from 2003 has given this area its characteristic look with tall scorched trees and a bright green forest floor. It was such a stunning landscape to hike through and very different from Banff National Park where the forest generally is very dense. Kootenay is the only national park in the Canadian Rockies where we have seen moose, the new open areas are ideal for this large animal.

We reached the first ochre bed after about 3.5 kilometres. The orange soil and water was impressive and the colours got more impressive the further along the trail we got. I can understand that Indian tribes were attracted to this area in earlier day to harvest from the ochre beds. The Paint Pots site is still considered a sacred site by First Nations today and should be treated with respect.

In earlier times Indian tribes from the mountains and prairies travelled here to obtain the “red earth”. The yellow ochre was cleaned, kneaded with water into walnut-size balls and flattened into cakes. The cakes were baked in a fire, then ground to a powder. The red powder was mixed with fish oil or animal grease for use in painting bodies, tipis, clothing and pictures on rock.

After passing the first wet area of the ochre beds we came to this dry patch that was bright yellow and orange. The colours from the beds, forest and snow capped mountains were amazing. In this area there were also some remnants from newer harvest of the ochre beds and interpretive signs telling the story of the ochre beds.

In the early 1900s the ochre beds were recognised as being of commercial importance and were actively mined. The ochre was dug by hand, sacked and hauled by horse-drawn wagons to the C.P.R. line at present day Castle Mountain, 24 kilometres away. It was then shipped by train to Calgary to be used as a pigment base for paint. In the 1920s, a more elaborate extraction method was used. Rail cars, horse-drawn scoops, clay tiles, and grinding machinery was used to collect, roast and grind the oxide. 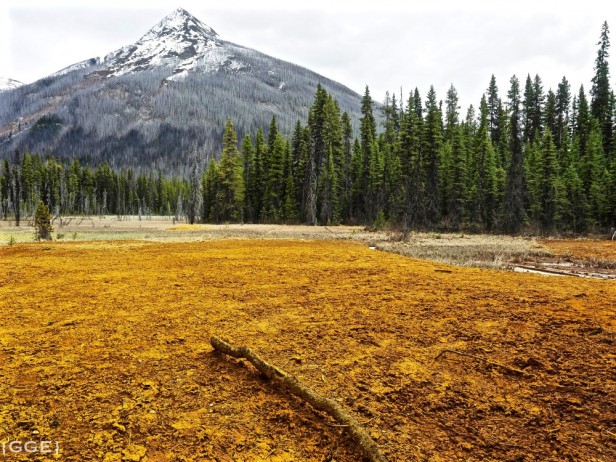 We continued up towards the Paint Pots by following the orange stream that was feeding the ochre beds. The stream seemed to have the Paint Pots as the source. It was a bit absurd to think that these colours were all natural. I hadn’t seen anything similar before.

When we got to the Paint Pots we found they were bright yellow and green. There was a clear transition between the two colours in the water. The pots are formed by the accumulation of iron oxide around the outlets of three cold mineral springs. The green colour is the result of mixing with fresh water from a small streams that empties into the pool.

These paint pots are the source of the ochre which was used by the Indian and the Early White Man. To the Indian there was a big animal spotter, a thunder spirit in the springs. They used to hear something here, like a flute or war songs. According to the Stoneys, the spirit talked to them but they could never see anything.

Before returning to our car, that we had left at the parking lot at Marble Canyon, we took a lunch break at the bank of Kootenay River. The bridge you see in the background is new. During the flood of 2013 the original bridge was destroyed and to visit the Paint Pots you had to follow our route, i.e. park at Marble Canyon and hike down. This season the new bridge is open and you can again use the parking lot at the Paint Pots for a much shorter walk. But shorter doesn’t always mean better! 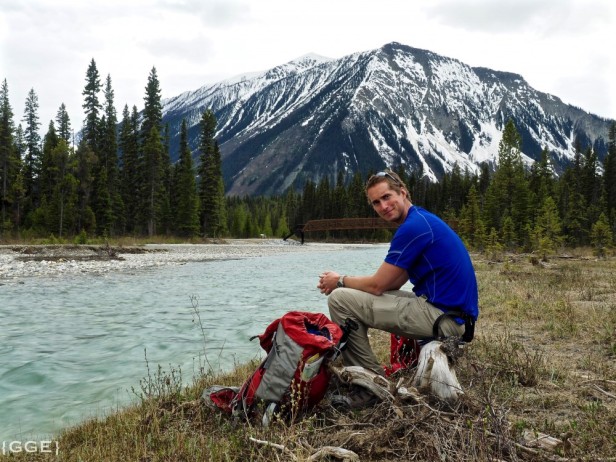 Thanks for reading. Please feel free to leave a comment, we’d love to hear what you think!