On our third day in Prince William Sound we woke up to the sound of rain drops hitting the water. Prince William Sound is a wet eco-system called a temperate rain forest which is defined as a woodland of a mild climatic area that receives heavy rainfall, so we well prepared for some rainy days. Hey – had it not been for the rain Chugach National Forest had not been the lush, green area we loved so much! Trees stay green all year around here, like white spruce, Sitka spruce, mountain hemlock and western hemlock.

The Captain had anchored up in Schoppe Bay this morning and we dressed up in rain gear ready for some kayaking and bear hunting! Well – only with cameras that is, no weapons were involved in this hunt:) Our kayaking route went along the shore and through a narrow passage leading us to a secluded cove. It was amazing to see the number of star fish in this area. They were everywhere! Going through the passage big, red/purple star fish covered the rocks on each side of the passage, it was beautiful. 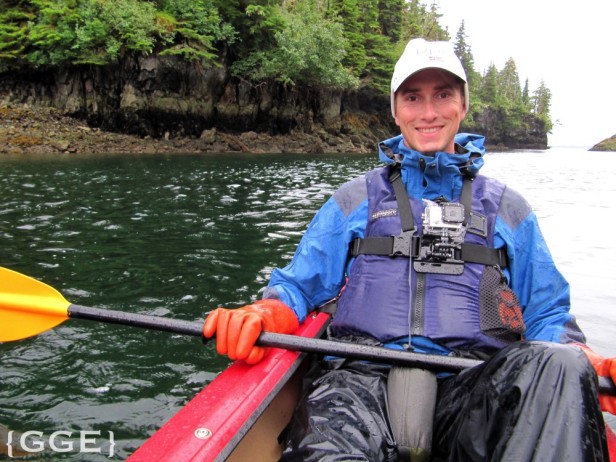 Happy camper (or in this case kayaker) despite some rain:) 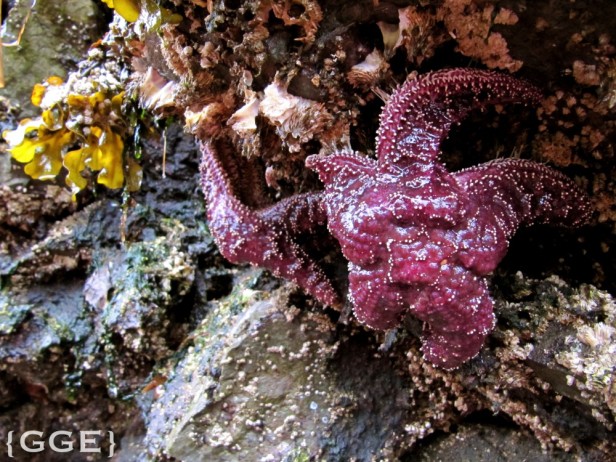 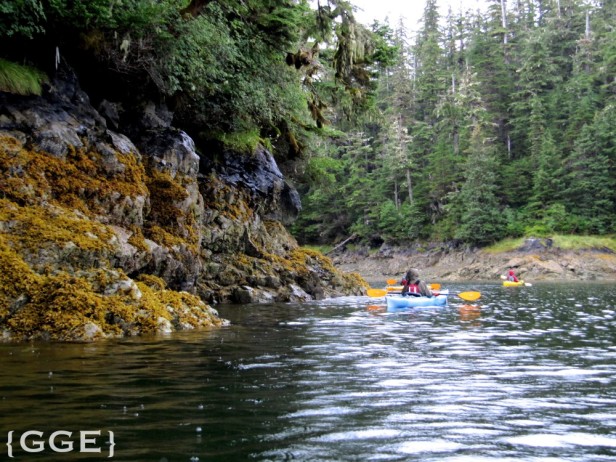 Making our way through the narrow passage full of star fish 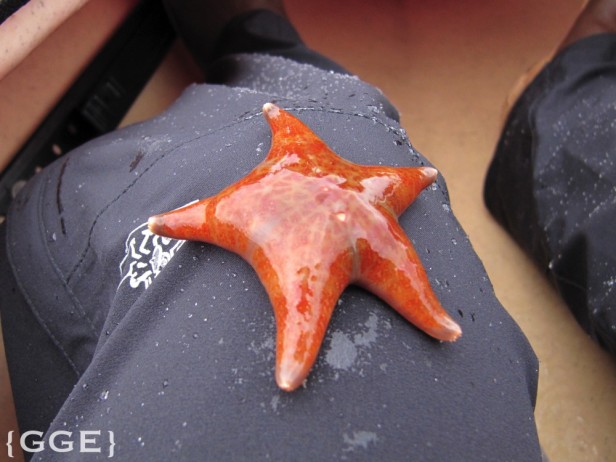 After going through the passage we entered a calm, small cove where we went on shore. Just around the corner there was a stream the salmon use for spawning, and we were hoping to see some bears feeding of the salmon. When we got to the ‘feeding grounds’ there was lots of spawned-out salmon rotting on the river bank and also some evidence of bears having been in the area as not all of salmon had died a natural death. Based on the evidence at the crime scene i seems like the bears prefer the eggs and leave the rest of the salmon to decompose. There was still lots of salmon trying to make their way up to spawn so I am sure the bears made their way back later to continue the feast. 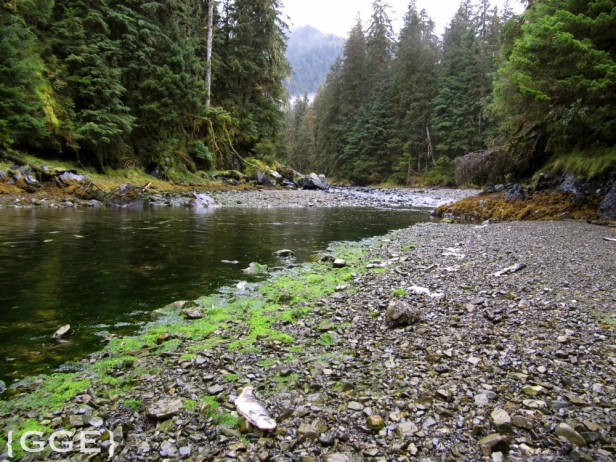 We got a little bit of excitement when we got back to the kayaks as the tide had turned and it was getting towards high tide. We hadn’t pulled the kayaks high enough on the bank and they were floating freely on the water. It was not deep waters and our guide didn’t mind getting wet so she waded after the closest kayak and used it to gather the rest of the kayaks for us. Lesson learnt! The high tide coming in also meant it was quite a challenge getting out of the narrow passage again as there was now a decent current going into the cove. Fun times!

As we had a tandem kayak we made if fairly fast through the passage and since we were back at the boat before the rest of the group we got the opportunity to continue kayaking and the crew would pick us up further out in Schoppe Bay. My husband was super excited, while I was a bit exhausted after fighting the current, but he promised to do be the muscles on our continuation so off we went.

Our kayaking route in Schoppe Bay

Despite the rain I was very happy we continued on as this is when we saw most of the wildlife. I guess it is easier coming close to wildlife being a single kayak instead of a larger group. We saw several bald eagles, and one of them even rewarded us with a nice picture as it took of and flew on to the next tree. We also saw several harbour seals. They were curious, but kept a safe distance to us. 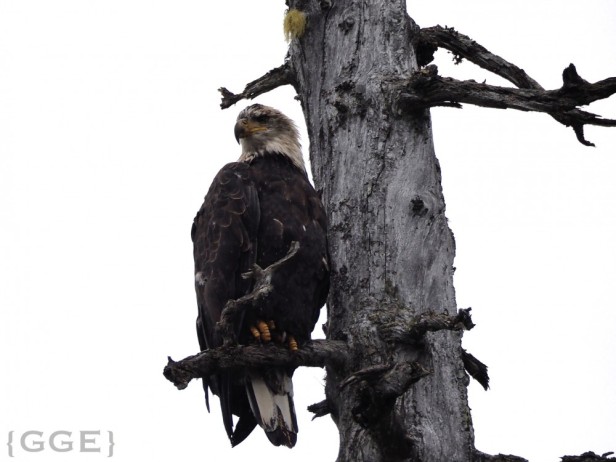 A bald eagle keeping look out … 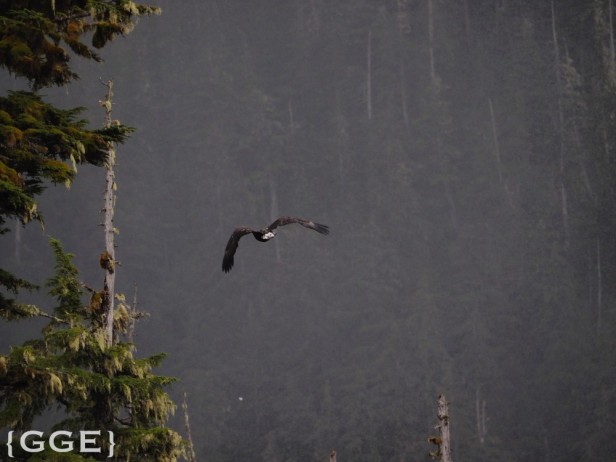 …before it decides to move on

As we continued on we realised we were coming up on another small stream. Most of the streams in the area have salmon going up to spawn, which means there could potentially be bears as well. Due to the heavy rain we couldn’t see any bears from a distance, but decided to stay quiet and slowly made our way towards the stream. And can you believe it – when we got closer we could see movements. It wasn’t just one bear, it was a mama and her two cubs! My husband was sitting under a small tarp made up by a rain coat we had with us trying to get some pictures of the adorable cubs, but as they were probably 300 feet away if was difficult. He managed to get a couple of shots before we decided to put the camera away and just sit quietly in the kayaking and watch the bears feeding. The black bear mama fairly soon became aware of our presence and kept an eye on us. but she stayed feeding for a long time before they moved on. 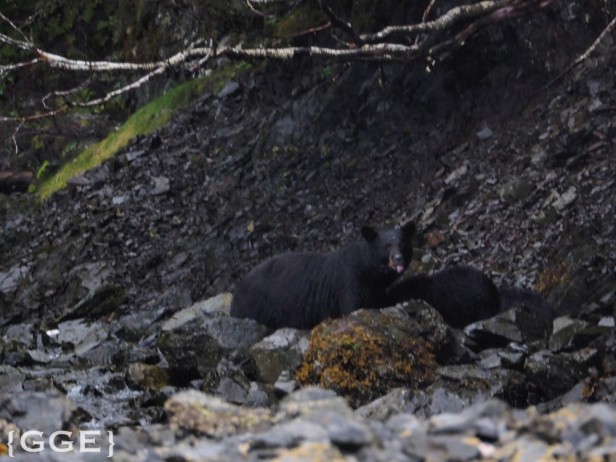 A black bear and her two cubs feeding on spawning salmon 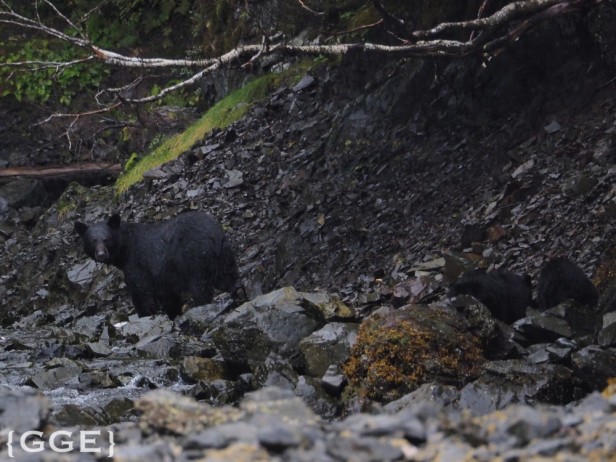 The mama black bear is keeping an eye on us

Spawning salmon, kayaking amongst star fish, harbour seals, bald eagles and black bears. What a wilderness paradise! I felt so grateful to have experienced all this on a short morning paddle.

This post is part of our Alaska series, if you want to read more check out this post: ‘Our Alaskan Honeymoon – a mini series’.

Thanks for reading, your comments are much appreciated. I would love to hear what you think!

67 thoughts on “A sea of starfish” 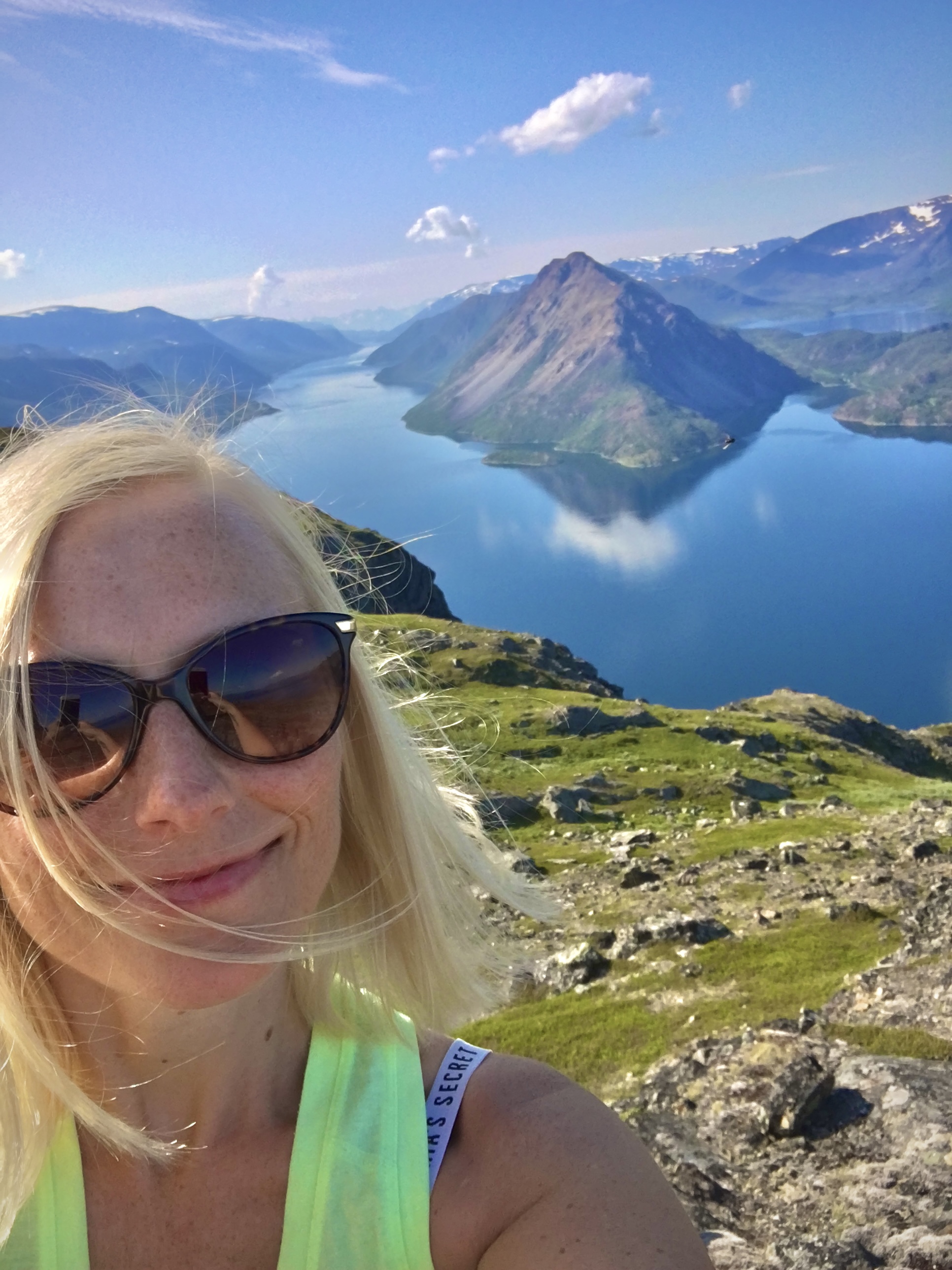